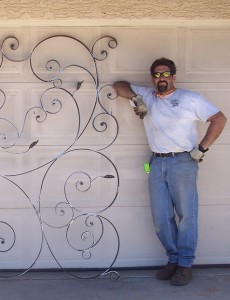 Poppa Dragon was born in Rome, NY on Ground Hogs day in 1967. He comes from a large Italian family of Blacksmiths, machinists, and tradesman. He was fortunate to inherit his maternal grandfather’s (Gregory Scicchitano) skills as a blacksmith and all around tradesman.

In 1996 he accepted an apprenticeship in his Uncle’s Blacksmith shop, Raulli’s Iron Works. This came after two college degrees and several unsatisfactory career paths which included teaching high school, child abuse investigation, and customer service management. Within a few months of working with his cousins he was completely enthralled by the magic of forged ironwork.

Michael and his wife Dana moved to Mesa Arizona in 1998. He accepted journeyman positions at several different metal working shops. In 2006 he opened a shop of his own and began teaching blacksmithing at the Mesa Arts Center. Dragonforge Ironworks LLC continues to produce heirloom quality hand-forged iron for clients all over the United States.

An invitation by CROFT (Celtic Reenactment Organization for Fellowship and Trades) to staff a Blacksmith Shop at the Arizona Renaissance Festival was eagerly accepted in 2008. This addition of the Celtic Dragon Blacksmith Shoppe and the Dragon’s Armoury (bladesmithing and armour crafting) to Dragonforge Ironworks allowed us to indulge in our passion for swords and things medieval. We have completed our 13th Season at ARF as of Spring 2020 (albeit abbreviated due to COVID).

In addition to running Dragonforge Ironworks, Michael is now teaching engineering at Arizona State University for the School of Biological and Health Systems Engineering (Biomedical Engineering).